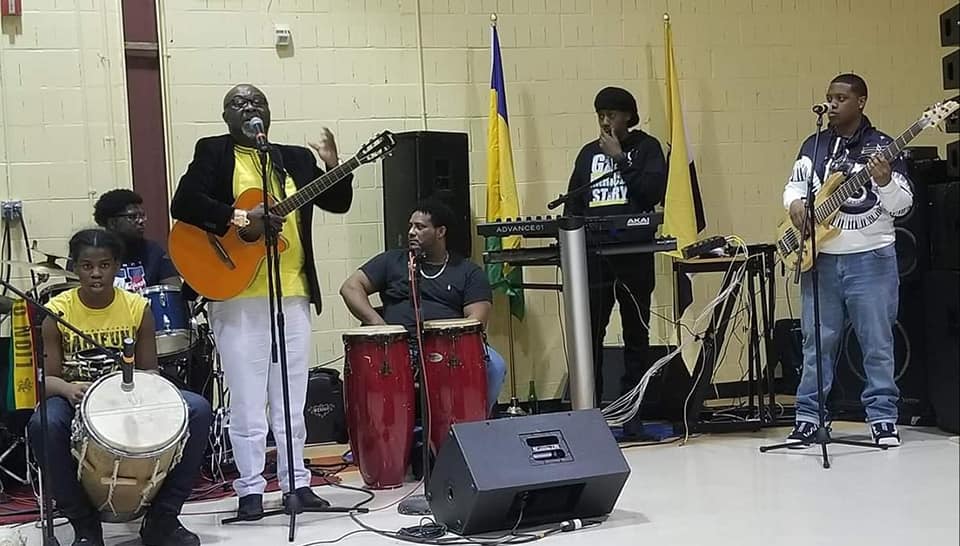 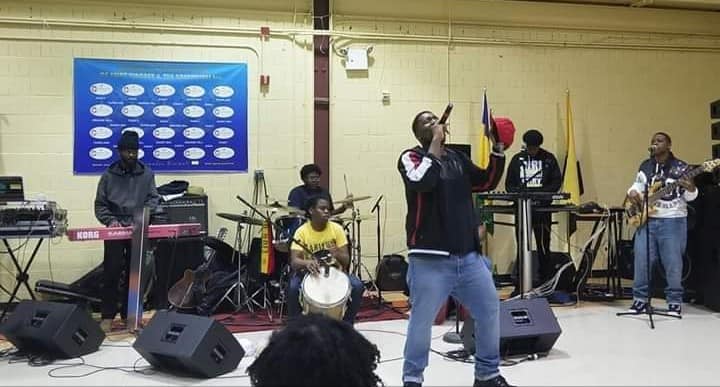 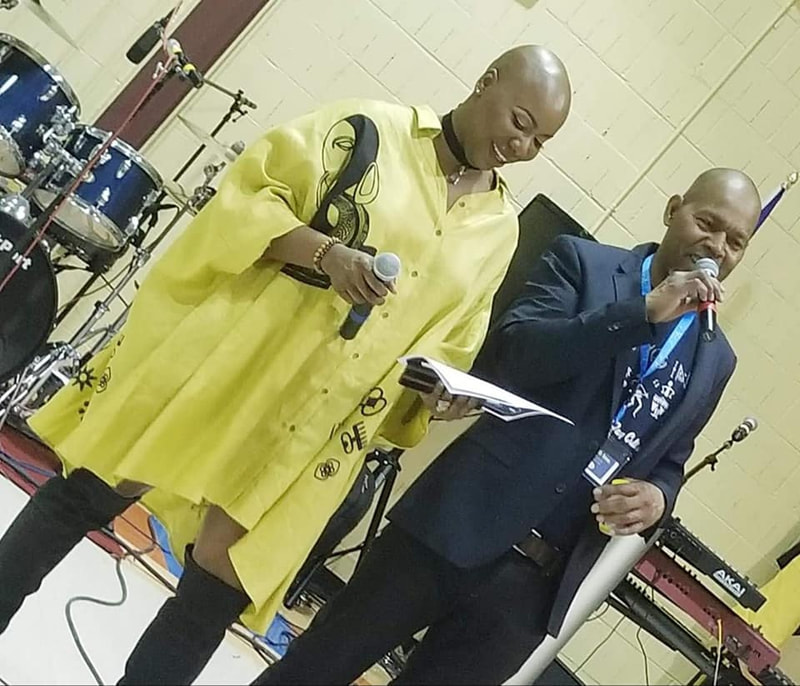 Written by Nelson King, Caribbean Life
Sat. 09 March 2019: Several Vincentian and Garifuna artistes Saturday night brought the house down at the Friends of Crown Heights Educational Center in Brooklyn, as the Brooklyn-based Garifuna Indigenous People of St. Vincent and the Grenadines, Inc. (GIPSVG) hosted its 4th Annual National Heroes Day Cultural Fest.  The Brooklyn-based De Magma Band, Chanique, Ron Pompey, PreZzii Don and Zeek collaborated with GIPSVG dancers, the Bronx-based GX-Team and Don Cuellar, and Wabafu Dance Theatre in entertaining the sell-out audience in near five hours of riveting music, songs, historical dances and drumming.
After GX-Team, Cuellar, Wabufu Dance Theatre and GIPSVG dancers revved up captivating patrons, Chanique continued the merriment by belching out Bob Marley’s “Rivers of Babylon”; Rasum’s “Perseverance”; her singles “I Can Do Anything” and “Don’t Break My Heart”; and “You Want Me to Go.”    Vincentian calypsonian Ron Pompey then brought nostalgia with hits of yesteryear, such as “Wine Maria”; “Count Yo Money”; “Banana Police”; “Keep Loving Me” and “The Lion Coming.”  Chanique and Pompey also teamed up for part of “Keep Loving Me.”
The event also featured performances by GIPSVG Children’s Group, as well as trivia on the history of the Garifuna and addresses by GIPSVG president Marcia James, and St. Vincent and the Grenadines’ United States Consul General Howie Prince.
“We are very pleased that you have joined us to celebrate the legacy of St. Vincent and the Grenadines’ first national hero, Chief Joseph Chatoyer,” said James, a native of Owia, a village north of the Rabacca River on mainland St. Vincent, one of the indigenous communities in the country.
Other indigenous communities north of the Rabacca River include Orange Hill, Overland, Sandy Bay, Point and Fancy.
“We thank you for your support and look forward for your continued support,” James added.
Prince traced the Garifuna history back to 1635, when, he said, there was the “floundering of two British ships carrying African slaves” and the consequent “intermingl­ing of the Carib-Arawak population.” He also referred to “the rise of great chiefs, Chatoyer and Duvali,” and the ultimate “death of Chatoyer” and the “defeat of the Garifuna” in 1795.
​Patrons feasted on a number of indigenous foods, such as dukuna (a potato-based pastry wrapped in banana leaf or foil paper), and pelau, a favorite local dish. 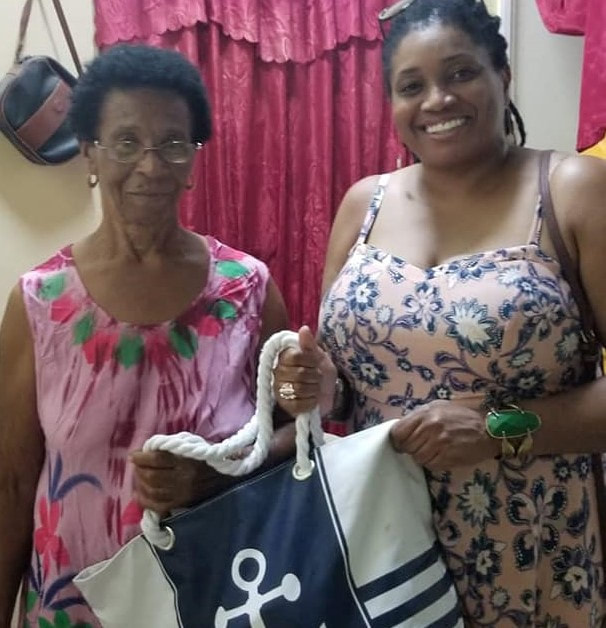 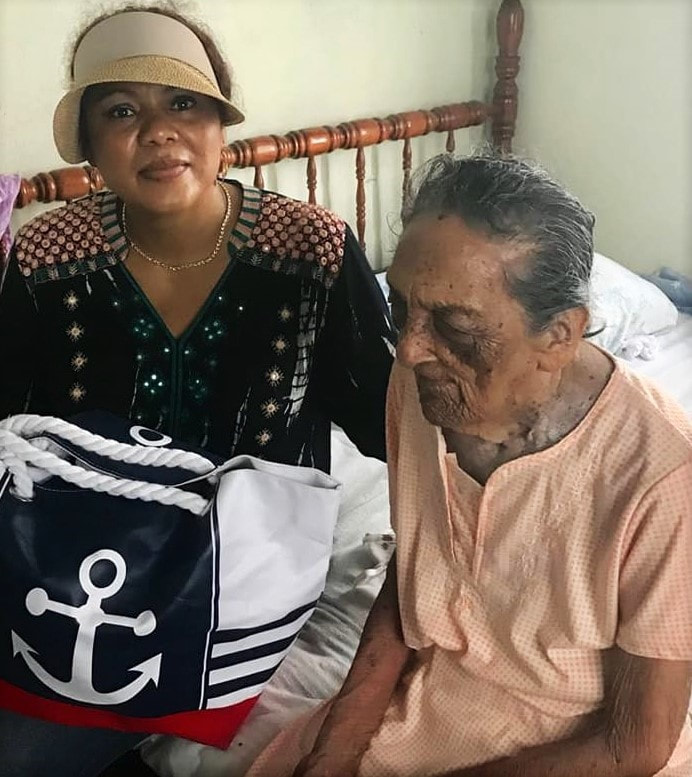 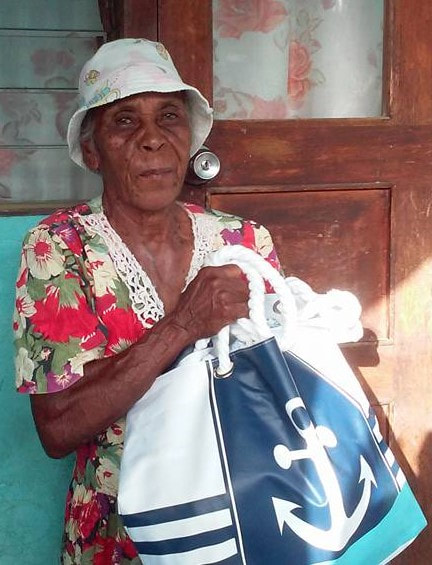 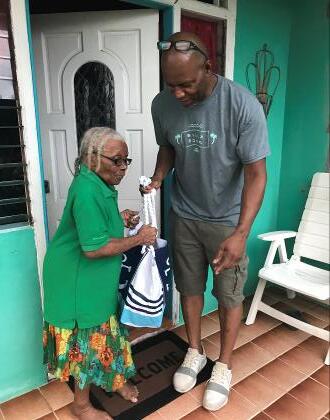 ​This year (2018), GIPSVG undertook its largest project to date working alongside Dr. Jacqueline Gaymes of the Caribbean Medical Mission, in shipping two 25ft containers of medical supplies to St. Vincent and the Grenadines. The containers are expected to be handed over to the government in a handover ceremony at a later date.  Through  Dr. Gaymes, a few members of the organisation became actively  involved in the planning and preparation of the visit of the Caribbean Medical Team to SVG where they will also engage in pro bono work, 01-08 August 2018.
In regards to the visit of the Caribbean Medical Mission, the visiting GIPSVG team and Dr. Gaymes  met with Prime Minister Dr. Ralph Gonsalves, Minister of Health  Hon. Luke Brown and his team on Thursday 26th August, as well as the Garifuna Medical Foundation in Sandy Bay later that day to discuss the ‘state of play’ and to fill the remaining gaps in anticipation of the Medical team arrival on 01 Aug.
On Sunday 29 August, in a small presentation ceremony held at the Owia recreational park, the visiting members of GIPSVG held an award presentation, honouring the top three students from each of the primary schools north of the Rabacca River, who would have successfully completed  the Caribbean Primary Exit Assessment (CPEA).  A total of twelve students received  school packages intended to assist as they begin the new school year.   During the ceremony, presentations were also made to the two contestants from the Garifuna community who would have participated  in this years ‘Miss SVG 2018’.  The winner, Miss Shellisa Nanton of Overland  and  Miss Azanie Lavia of Owia each  received a personalised crystal plaque and a small monetary donation as a token of appreciation for their positive representation of the garifuna community in the Miss SVG pageant. Both contestants expressed thanks for the thoughtful gesture and pledged to continue representing the Garifuna community of St. Vincent and the Grenadines. Later that evening, presentations were also made to senior citizens who were identified as the oldest within each of the communities above the river. Six senior citizens, namely: Ms.Morgan of Sandy Bay, Ms.Lampkin of Overland, Mr.George Daniel of Point, Ms Annie Baptiste of Fancy , Ms. Etta Williams of Owia and Ms. Virginia McDonald of Orange Hill  all received care packages containing personal care items.  The senior citizens were most gracious in their response as they expressed thanks to the organisation.
President of the organisation, Mrs. Marcia James who led the presentations, expressed her gratitude to the Owia Sports and Cultural Organisation and the Garifuna Medical Foundation for all their engagement and support on the ground here in St. Vincent and the Grenadines.
Members of the GIPSVG visiting team were: Mrs. Marcia James (President) and Patrick James, Dr. Veronica Francois-Kydd (treasurer), Mrs. Ketticia Lewis (Executive Secretary), Mr. Wayne Lewis (PRO) and Ms. Marsena Ballantyne (Member). 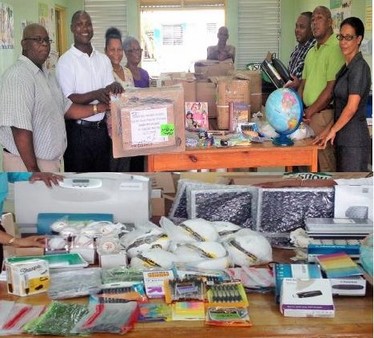 GIPSVG Inc. gives back to Indigenous Communities above the River:e River:
June 17th - Sandy Bay, St.Vincent and the Grenadine:  Items of schools supplies & equipment were handed over to institutions above the Rabacca River on Friday 17th June 2016 during a ceremony held at the Sandy Bay Primary School. The donations were made by the New York based Organization "Garifuna Indigenous People of St. Vincent and the Grenadines Incorporated" (GIPSVG Inc.) as part of their commitment to giving back to their home communities. Donations included: Five computers & 2 printers to the Sandy Bay Resource Centre; 1 desktop computer & 1 laptop to the Garifuna Radio Station; 10 back packs containing school supplies to the top 10 CPEA students from above the Rabacca River, 24 soccer balls, 24 baseballs and other items of school supplies to the Sandy Bay Primary School. The recipients expressed deep appreciation for the items received stating that the donations “will help tremendously in defraying the cost of school supplies for the top 10 CPEA performers and thus easing their parent’s pockets”. The GIPSVG Inc. extends sincere thanks to all its members, Standard Shippers, and TD bank located on Flatlands Avenue, Brooklyn NY` for their contributions.***